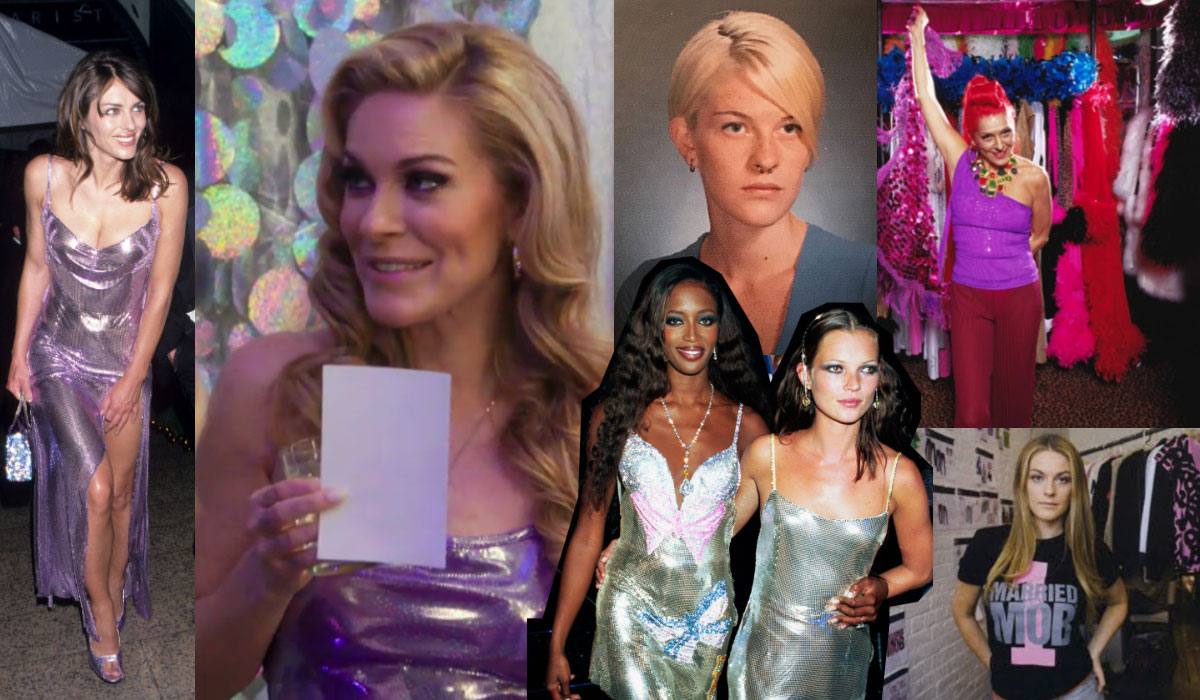 Iconic 2 Me is a new column that explores the most beloved objects of iconic people on the internet. From prom dresses to first perfumes, we’re going deep (but like, in a quick-fire Q&A) with our faves.

Just like the nostalgic past, the world of The Real Housewives is a place I escape to regularly. It’s a magical universe where a countess turned felon can become a cabaret star, a fight about a dog named Lucy Lucy Apple Juice can end a friendship, and a table flip can change an entire genre of television. Said universe is so dotted with iconic characters that it’s rare for a newbie to break through on her first try. Leah McSweeney, however, came in hot with a mouth full of unfiltered opinions and an impressive ability to fling lit tiki torches for her first season of The Real Housewives of New York in 2020.

A born and bred New Yorker with a wild side, McSweeney is full of amazing stories, like the time she partied with Lil Kim, and the time she named her daughter after Dee-Lite frontwoman, Lady Miss Kier. In 2004, she founded Married to the Mob, a rare women’s streetwear brand in a sea of men. And with its cheeky riffs on luxury logos, rap lyrics and feminist manifestos, the brand garnered major cred from retailers like Colette (RIP). Today, its touted by celeb fans like Rihanna.

Back in 1995 though, McSweeney was just a junior-high schooler at an Upper East Side Catholic school (the same one that famously spawned Lady Gaga) with a penchant for the fashion statements that we’ve come to know her for on RHONY. Sparkly metallic dresses were very much ~the moment~ in the mid to late 1990s—shout out to Kate Moss, Naomi Campbell and Elizabeth Hurley all rocking the metallic Versace chainmail editions that later cemented the trend to grail status—and when a 13-year-old McSweeney walked into Patricia Field’s first boutique on 8th Street, she knew she had to have one.

How that dress later ended up on the Season 12 finale of RHONY is a much more evocative story than you’d think. Here, McSweeney tells us all about the metallic purple relic, its meaning, and more. 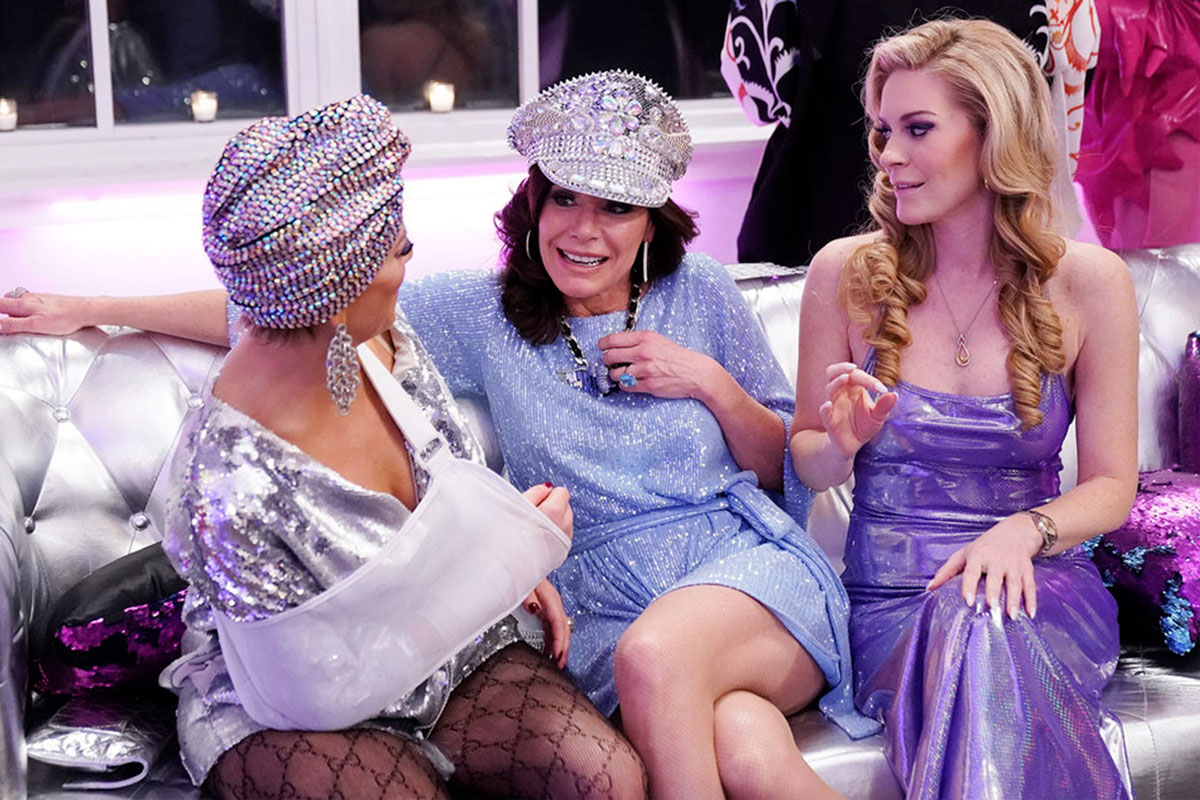 Leah McSweeney wearing her vintage Patricia Field dress on the Season 12 finale of The Real Housewives of New York.

What are you most nostalgic for?
I got to experience New York City in the ‘90s and I feel like that is an era that can never be replicated, duplicated, nothing. And it’s something that has influenced so much, and I got to be a part of it. I live in the past, I really do. And I’m happy back there.

You post so many great #tbts. How did you become friends with Lady Miss Kier?
I have to tell you how blessed slash lucky I am to have met not only her, but I named my daughter after Lady Miss Kier and when I was pregnant, her assistant emailed me. I had made a T-shirt with her on it, and I thought they were going to sue me, but they wanted to make T-shirts with the graphic. And I was like “P.S. I’m naming my daughter Kier.” And they’re like “Ok, she wants to meet you.” So, I meet her at GOBO at 8th [Street] and 6th Avenue. I was so nervous I thought I was going to go into early labour. But me and her are still friends to this day. She gave me her blessing to name my daughter Kier, she sent her toys. They say don’t meet your heroes, but I don’t believe in that.

And what about Lil Kim?!
My friend Laura Styles who is on Hot 97 knows how much I love Lil Kim and she surprised me and invited me to the studio when it was Lil Kim’s birthday, and she released a new song. Lil Kim was sitting there, and we locked eyes and she stood up to greet me, not knowing who I was. She was the sweetest, kindest person. She’s worn some of my Married to the Mob stuff, so she was aware of my brand, but fast forward to this past summer and I actually went to dinner with her for our mutual friend Noelle’s birthday!

Not to make this all about people you’re friends with but I need to know how Lourdes Leon and Azealia Banks ended up at your RHONY screening party?
It really was beyond. I don’t know, it’s like downtown New York. One degree of separation. Azealia I’ve been friends with since she was like 16. I feel like she’s so misunderstood and villainized. Talk about Black women being mistreated. So that’s why she was there and Lourdes, we just started talking through DMs. She watches all the Housewives and I invited her to the party. It wasn’t your typical Housewives party. That was one of the most fun parties.

It’s funny because in that first episode I say I’m having my Madonna “Ray of Light” moment, so it was a mindfuck for me. Lourdes is so her own person and I can’t imagine having a mom that’s Madonna. As cool as it is, it’s gotta be challenging. 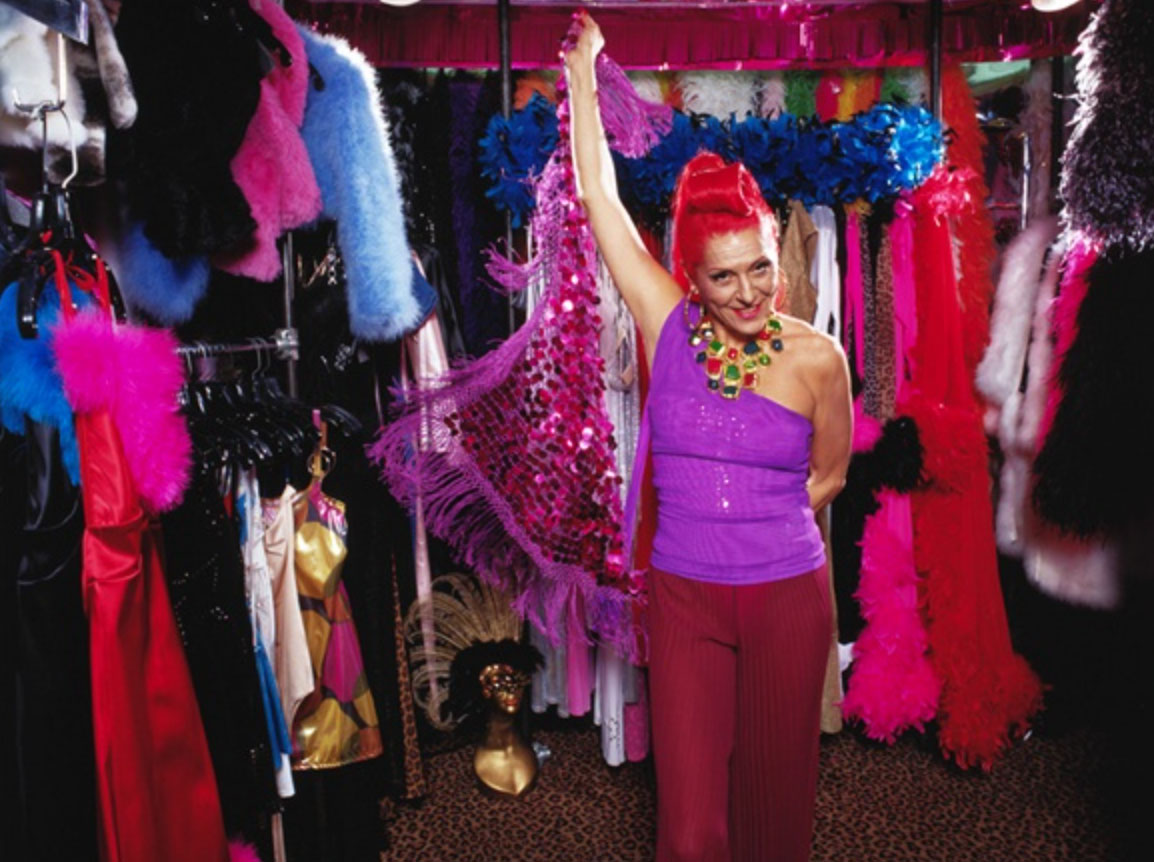 Patricia Field in her iconic boutique circa the 1990s. 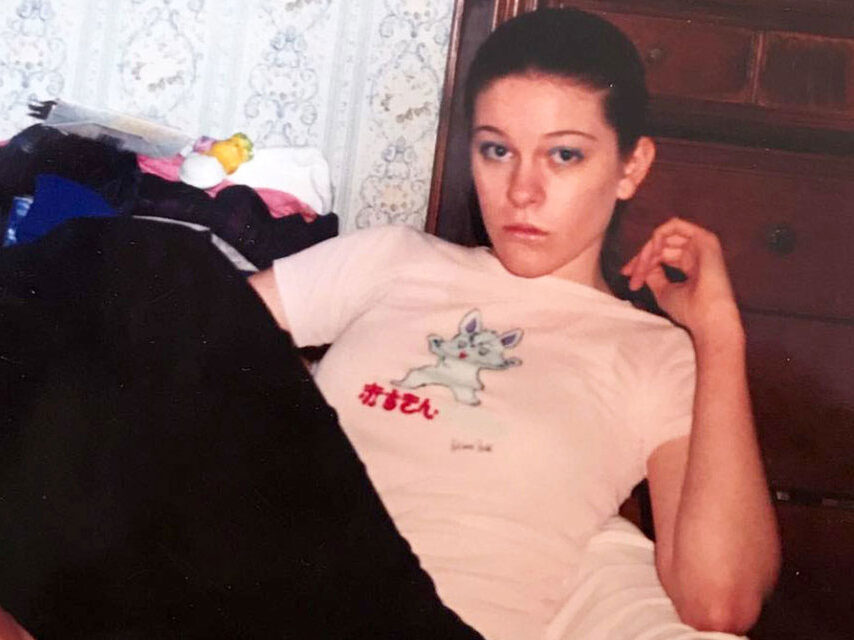 "I got to experience New York City in the ‘90s and I feel like that is an era that can never be replicated, duplicated, nothing."

So, how did this dress come into your life?
We had an eighth grade Christmas dance at Sacred Heart, and I obviously was like “I need to get my dress from Pat Field!” The dressing rooms had giant murals of naked people, so there were just giant dicks in your face. The dress came in pink and baby blue – I grabbed the purple. I was very busty when I was younger, and I filled the thing out. I looked hot for a 13-year-old! And my mother was like, “OMG, this is your Upper East Side private school Christmas dance!” and the drag queens that were working there were like, “No, she needs this dress!” They helped me talk her into it. My class at Sacred Heart was extremely fashion forward, it wasn’t like I totally stood out. I’m keeping that dress forever, it’s a relic! Pat Field’s on 8th Street was the shit. You had no idea who was going to be there.

How did you end up wearing the dress on RHONY?
It’s karmic destiny that I ended up on the show. I think I ended up on the show to work out psychological issues that I had from going to Sacred Heart. Even though I loved my friends there, I was the only girl that didn’t live on the Upper East Side. We weren’t poor, but I felt like there was a huge difference between me and them. So, the fact that I ended up on a show with a bunch of UES women felt like I could finally fit in. Me wearing that dress felt really meaningful. It was a full circle moment.

What’s the best thing that happened to you wearing the dress?
Probably Dorinda flipping out on me. I almost got spit on.

Speaking of… who would you bring back to the cast if you could?
I miss Tinsley and I miss Dorinda, so it was weird filming without them, even though they hated each other. Those were my bitches. I would love to have them both back.

In terms of someone I didn’t film with probably Jules. I just feel like she didn’t get a fair shot. She seems super cool and everyone picked on her about having an eating disorder.

So you watched RHONY before starring on it?
I watched the early seasons and then the last one was the one with Luann and Tom. But I was a religious RHONJ and RHOBH watcher.

Can you still watch Housewives when you’re on Housewives?
Oh yeah!

What was your style like when you started Married to the Mob?
I wore over the knee white boots (now I have a YSL pair), I had a knockoff Takashi Murakami for Louis Vuitton belt that I wore with Miss Sixty jeans. And I had this sick Baby Phat jacket that was reversible – on one side it was fuzzy faux fur camo and on the other was a hunter green leather. I was very classic early 2000s.

And what inspired you to start the line?
I started the line because I was unemployable. I wanted to party. I was hanging out with all these streetwear guys that got to fly all over the world for free. I wanted to travel for free. Rob [Cristofaro] is the most amazing designer, and we did it collaboratively. He’d bring in his own style, which was to a much higher standard than mine. But I knew there were a couple things I wanted to do. I did a lot of logos and flipped them, like “Supreme Bitch” in the style of Supreme.

Did you ever get sued by the brands you remixed?
Supreme sued me, but I was only making like 200 shirts at the time, so no one else really cared. I did get a letter about a T-shirt I did with Anna Wintour’s face on it. It was her bob and sunglasses, and her face was a skeleton. Colette in Paris was selling them. And we got a letter from a lawyer that said Karl Lagerfeld snitched on us and told Anna Wintour about it. It said, “Karl Lagerfeld was shopping at Colette, and he doesn’t think this is very respectful.” How amazing is that?

Read more like this: The women of The Hills were the original influencers